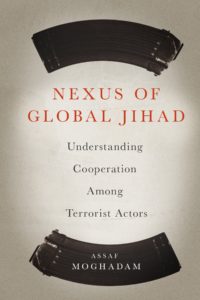 Cooperation among terrorist actors defines and underlies a large and growing part of the contemporary threat posed by terrorism, especially of the global jihadist variety. Jihadist groups such as the Islamic State and Al Qaeda compete with each other for primacy in the global jihad movement by building alliances and lesser partnerships with friends and foes. Informal Salafist and jihadist networks in Europe collaborate with each other both physically or online, and in turn cooperate with formal organizations in places like Iraq or Syria by supplying foreign fighters. Scholars of terrorism and counterterrorism analysts alike are grappling to understand these phenomena.

To shed light on this topic, Nexus of Global Jihad examines how contemporary jihadist terrorist and militant actors cooperate. It advances new theoretical concepts and analytical models that help scholars comprehend the increasingly complex international terrorist nexus, while providing counterterrorism analysts new tools with which to address this threat.

Theoretically, the study relies on the agent-structure debate to argue that contemporary terrorist cooperation must be understood in the context of transformational changes affecting both the actors of terrorism and the enabling environment.

Nexus of Global Jihad constructs a novel, comprehensive, and dynamic typology of terrorist cooperation and argues that established forms of inter-organizational terrorist cooperation are now accompanied by an emerging form of “networked cooperation”. The book also offers a distinction between high-end and low-end forms of cooperation, based on differing qualities of collaborative relationships. To illustrate the model, in-depth case studies using newly declassified primary source material shed new light on Al Qaeda’s relationship with Iran and with Al Qaeda in the Arabian Peninsula. The book also explores the Sharia4 movement as a case study of cooperation between informal actors.

Theoretically, the book’s main contribution lies in expanding the scope of the analysis of terrorist cooperation to include a variety of terrorist actors and environmental influences. Practically, it offers several recommendations for policy analysis by recommending the adoption of enhanced means to collect intelligence on informal terrorist actors; constrain the enabling environment; and adopt a tailored approach at disrupting terrorist cooperation that can be adjusted depending on the type of cooperation.

What explains changing patterns of cooperation among terrorists—who cooperates, how, and in what political contexts? Relying on an impressive range of examples as well as established theory, Assaf Moghadam expertly answers this critical but rarely addressed question and in doing so illustrates the complexity of a dynamic and shifting threat. Understanding these interactions within the jihadist universe is essential to an appropriate response to contemporary terrorism.
Martha Crenshaw, Center for International Security and Cooperation, Stanford University

Nexus of Global Jihadis a major contribution to the field of terrorism studies. It is refreshingly free of academic jargon, but it is also a work for first class scholarship and deep research. Highly recommended.
Peter Bergen, Author of United States of Jihad: Investigating America’s Homegrown Terrorists

Nexus of Global Jihad offers an unparalleled look at the many dimensions of terrorist group cooperation, with a particular focus on the greatest threat today—the global jihadist movement. Moghadam’s work is theoretically informed and empirically rich, greatly advancing our knowledge of terrorism in general and clandestine cooperation in particular.
Daniel Byman, Georgetown University

Nexus of Global Jihad is a must read and is destined to become a defining text on cooperation among terrorist actors.
Phil Williams, University of Pittsburgh

An impressive achievement. Moghadam’s book is destined to become the standard reference on the subject of terrorist cooperation for the foreseeable future.
Ely Karmon, author of Coalitions Between Terrorist Organizations: Revolutionaries, Nationalists, and Islamists

A great book for anyone who wants to study al-Qaeda’s and ISIS’s affiliate network. By developing a comprehensive and convincing typology of terrorist cooperation, Moghadam adds substantially to our knowledge of the phenomenon.
Guido Steinberg, author of German Jihad: On the Internationalization of Islamist Terrorism

For anyone seriously engaged in the field of counter-terrorism, Nexus of Global Jihad is a must-read.
Israel Journal of Foreign Affairs

The book is a must read for policy makers, students and academics for whom terrorism is both a threat and a subject for research.
Strategic Analysis